Unity Day USA was born at the heels of the 9/11 tragedy, to express that each one of the 301 Million of us Americans are united together to stand up for the safety, security, peace and cohesiveness of America.

We are a part of the mosaic and each one of us needs to remain connected with the other to make us one people and one nation under God’s protection. It is an initiative of American Muslims to add their positive contribution to America in uniting the people on the day of disharmony.

On that tragic day, September 11, 2001, I was on the Radio addressing the public in Dallas and making sense out of the chaos that happened that day. I was on air from 10Am through 5:00 PM straight;

• My first goal was to bring a sense of clarity and direction to the public. Then pave the way for a sense of purpose, a sense of what needs to be done. I repeated the same thing on its anniversary.
• By the end of the day a clear sense of direction was developed followed by: I) Multi-faith prayers ii) blood donation ii) donation of funds. The Blood centers had to close down due to the people’s overwhelming response.

• The fog was clearing up – I) Osama bin Laden was the bad guy ii) Muslims had nothing to do with Osama iii) Declaration of war against Osama.

For the First four years I did the radio show talking about the effect of 9/11 on society, economy and refreshing and galvanizing the interfaith movement. On the 5th anniversary this Unity Day was born. It is my love for my country to make this day a national day, an initiative of Muslims.
To make our homeland a safe, secure, peaceful and a prosperous place we have to relentlessly pursue it. The work has to be done by you and I, and not look for some one else to do this for us; the American way. One of the many things we can do is to have a face to face with people of different faiths, ethnicities, races and other uniqueness', let’s build a threshold of acceptance for others and start dropping our phobias.

We the people of the United States of America of every faith, race, ethnicity, culture and background are here today, to express our desire to co-exist in peace, and pray for the unity, safety and well being of our nation.

The Civic Leaders included Mayors of Irving, Carrollton, Richardson, Grand Prairie and council members from many cities participated. The fire and police Chiefs, the County chief among others. Each one of the Mayors spoke for a brief 3 minutes about the need to co-exist.

Faith Leadership - Each faith tradition shared a line of wisdom from their tradition. Unity Day USA is about re-affirming our faith in the goodness in humans, and the longing for harmony and co-existence. Faiths included Baha’i, Buddhist, Christian, Earth Based Tradition, Hindu, Muslim, Jain, Jewish, Sikh, Wicca and Zoroastrian faiths.

The purpose of Unity day is bring together Americans of all hues and rededicated our pledge for the peace, prosperity and unity of our nation.

Recognitions - Several members of the community were recognized for their contributions in making this world a better place.

The Audience participated with joy, about 35 of them got on the stage in groups of three, and each group read the wisdom of religions mentioned above, written in 100 words.

I am committed to Unity day USA.
Mike Ghouse
http://www.mikeghouse.net/

Posted by Mike Ghouse at 9:07 AM No comments:

.
The program is set and is tightly scheduled. The event is an expression of solidarity by merely being there with face to face with people of different faiths, ethnicities, races and other uniqueness’s.

Posted by Mike Ghouse at 8:55 AM No comments:

What we need from you

1. Unity Day, what is it? :: Write a note in 100 words or less, the need for all of us Americans to remain United or what does one nation indivisible with liberty and justice for all. The selected item will be read by either you or one of us. Check the following link for references: http://www.foundationforpluralism.com/Images_UnityDay/UnityDay_Past_Comments.asp

2. Essence of your faith :: Write in 100 words or less, a summary of what your faith is all about, so if a person who does not know any thing about your faith, can read and understand it.

3. One line verse :: Send a one line verse from your scripture that guides humanity to co-exist. Please quote name of the book, verse # or page #.

You can write all that in the comments section below
Thank you.

Our 2009 theme continues to be "One Nation under God". Our religious leaders will seek guidance and wisdom from their respective faiths and our Civil servants and community leaders will echo the same sentiment and suggest ways in which we as individuals can work toward creating and sustaining cohesive and thriving local communities. 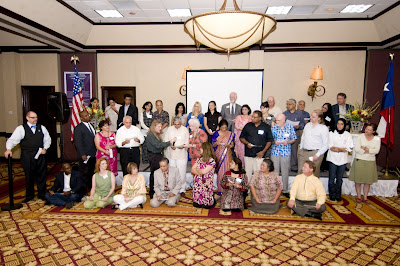 CLICK ON THE IMAGE TO GET LARGER VERSION. NOTE ABOUT THE IMAGE : (39 Members from the audience were asked to step up on the podium forming 13 groups of 3 each, each individual was asked to dare accept the randomly assigned faith, and then read one line from the assigned scripture, the participants had no idea what is coming up, but they sure enjoyed reading scriptures from the assigned faith and loved it.. for example, each one of the 39 individuals were given to read scriptures from a faith other than their own, and the selection was random. They all realized the the wisdom of each faith was beautiful - See all the pics in the left panel, again clicking on the image enlarges the picture) 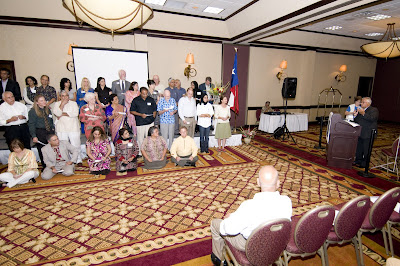 Our 2009 theme continues to be "One Nation under God". Our religious leaders will seek guidance and wisdom from their respective faiths and our Civil servants and community leaders will echo the same sentiment and suggest ways in which we as individuals can work toward creating and sustaining cohesive and thriving local communities.

Mike Ghouse, President of the organizations announced. “This is an annual event for all Americans to come together and look to each other as American and nothing but American. We will rededicate our pledge to the safety and security of our nation”.

The American Muslims have taken this initiative to remember one of the greatest tragedies in the history of our nation by bringing about a positive change to the 9/11 event. We are committed to make this day, the Sunday before 9/11, a day of Unity of Americans to pledge to the peace, unity and prosperity of our nation and the humanity.

As Americans we uphold, protect, defend and celebrate the values enshrined in our constitution. All our faiths reinforce the creed of "One Nation under God, with liberty and justice for all."

Information for the previous years
http://911unitydayusa.blogspot.com/2009/07/v-annual-unity-day-usa.html

We are pleased to list the organizations and individuals who have committed to fund the 5th Annual Unity Day USA. We invite donors in multiples of $100.00; and sponsorships in multiples of $500.00 . An accounting of the funds will be updated frequently on this site, every dollar received and paid will be listed here.

The following organizations have funded the event (more to be added), we appreciate their belief in "unity of mankind".

The individuals listed below see the need for humanity to co-exist and have voluntarily send their checks (All names will added upon receipt of the funds). A few want to remain anonymous and we honor them by their initials. We believe transparency is important and hence we will list all receipts and payements on this web.

Refreshements and Iftaar (breaking of fast for Muslims during Ramadan) arrangements are made by a donor and will be served at about 7:49 PM

It is an iniative of the American Muslims and the Foundation for Pluralism. You are welcome to share your views at the bottom comment box.
#

Email ThisBlogThis!Share to TwitterShare to FacebookShare to Pinterest
Labels: Funding and Budget

We are pleased to announce the names of the following volunteers A list of things to do is appended below;

The following volunteers have taken up the responsibility to bring at least ten individuals to the event and perhaps invite twenty five people they know. I Request each one of you to follow up with them and bring a list to Registration desk to check off when they walk in - please ask them ask for your name, as they would be listed as your guests. Thank you.

If you wish to volunteer, please send the email to: MikeGhouse@aol.com - in the subject line, please write "Volunteer for Unity Day" - Thanks

WHAT CAN YOU DO?

First, download the flier at this site, first item on the top left or and then you can forward the link, or simply copy the jpf file and paste it in the email and forward it.

Our Mission is to encourage individuals to develop an open mind and an open heart toward their follow beings. If we can learn to accept and respect the God given uniqueness of each one of the 7 billion of us, then conflicts fade and solutions emerge. We believe that knowledge leads to understanding and understanding to acceptance and appreciation of a different point of view.

Please send the information to UnitydayUSA@gmail.com
I am looking for a few good volunteers to invite every possible organization to the event.

Posted by Mike Ghouse at 5:12 AM No comments:

An intiative of American Muslims and the Foundation for Pluralism;

The following organizations are participating in the 5th Annual Unity Day USA event.


God Bless America
One Nation and One People with Liberty and Justice for all.